ASE's Mike Jones said given that 2013 also produced a strong performance compared to prior years this is a "creditable performance" in what, since the move to two registration months a year, has become a relatively quiet month.

Vehicle sales have driven the improvement in performance.

Jones said the key driver behind the increased profit remains the drop in the proportion of gross profit spent in the vehicle sales department which has remained at just over 62%.

"As average turnover levels are increasing, reflecting the increased volume of vehicles being sold (as well as registered), the financial contribution from the vehicle sales department continues to grow.

The short term outlook will be heavily dependent on the result for March and whether dealers can match their 2013 profit for that month of £79,000, he added. 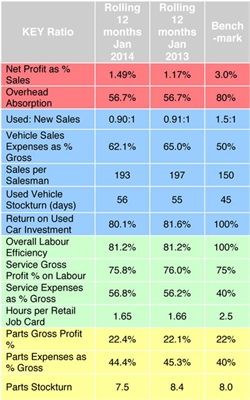