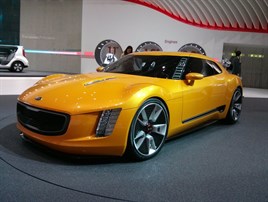 Kia Motors UK is pushing hard for a production version of the Stinger GT3 sports concept but the greenlight will only be given if there is global demand.

Paul Philpott, Kia Motors UK president and chief executive officer, told the Stinger GT3 is not part of Kia's production plans yet, but has received positive reaction from the US market.

He said the concept will also need a positive reception from Europe and Asia before it gets the production green light.

"We would love to sell it in the UK and we're pushing hard for it. It's not going to be a big volume seller, but it will work in Europe."

Kia was in a consolidation year in 2013 but dealers can will see the new Soul this year, with a replacement for the Sorento expected in 2015. There will also be replacements for Kia's established line-up of core products and the brand will continue to expand into niche segments.

The Procee'd GT and Cee'd GT have started this, the Soul EV will be another niche product and a production version of the Stinger would be the sports car halo product which has been rumoured for years.

The GT range is expected to expand further with other models in the Kia range like the Rio.