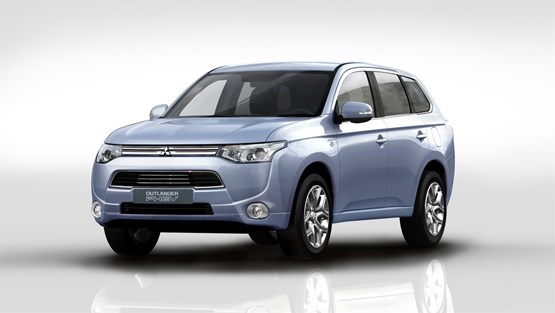 Mitsubishi will price its Outlander plug-in hybrid model at the same price as the diesel model in the UK at £28,249.

The price includes the £5,000 Government plug-in car grant. The PHEV is priced in line with the equivalent mid-trim diesel GX3 model.

Mitsubishi in Japan supported the decision from Mitsubishi Motors in the UK after posting a global profit for the first time in eight years.

Mitsubishi will also be boosting its marketing budget from £8 million to £20 million in the UK this year to help launch the Outlander PHEV.

Lance Bradley, Mitsubishi Motors in the UK managing director, is expecting the deal to bring a surge of volume to Mitsubishi dealers in the UK and he believes they are prepared.

Bradley said: “There are some manufacturers that are making big plans with their hybrid vehicles and this will throw them into disarray.

“We’re a small niche player and we can do something like this, create a bit of a stir.”

He told AM: “I never shy away from telling dealers the truth and I knew it would be tough in 2012 so I urged them to cut their costs.

“We had a record growth year in 2013 and we’ll do it again in 2014. If PHEV takes off in the way that it could, it will mean huge incremental volume for us."

Mitsubishi will be carefully communicating to customers and dealers whether to recommend the Outlander PHEV or diesel. For customers doing journeys of under 80 miles on average, it will be more economical to buy the PHEV, if they’re doing more than that, they will be guided to choose the diesel option.

Mitsubishi believes there is a wide potential audience of conquest customers it could attract from other brands if it can reach people with its increased marketing budget.

The Outlander PHEV takes five hours for a full charge or 30 minutes on a quick charger and emits just 44g/km of CO2 from the tailpipe. Mitsubishi has a deal with British Gas to fit home charging kits at customers’ houses for free.

The key message to company car drivers will be a simple one of 5% BIK and 100% write down allowance in the first year of ownership.

The benefits to a retailer customer will focus on the plug-in hybrid giving a range of up to 30 miles on pure electric mode.

Bradley said: “We learnt a lot from the launch of the i-Miev electric vehicle. We genuinely thought there would be a number of people that would be prepared to pay extra for that technology, but there weren’t. People still aren’t willing to pay a premium for that technology.

“There are a lot of people that do less than 30 miles a day. The key thing is to make people understand this is something different and it could be a real game changer for us. Every now and then someone comes to market with the best product at the right price.”

The 150% increase in marketing spend will also help Mitsubishi get its point across this year.

He said: “We have some big messages to get across. We have underspent on brand marketing for a little while. We need to tell people about Mitsubishi again and we will use Outlander PHEV to do that. Half of that marketing spend will be on PHEV.”

The growth Mitsubishi is expecting will not change the profile of dealers it is working with. The added volume expected from the Outlander PHEV will be awarded to the dealers that have stuck with the brand over the years.

Bradley said: “We have had big groups and PLCs as part of our franchise before. Some of them were fantastic and extremely professional, but they can have a change of policy and drop you over night and that doesn’t work for us.

“We don’t want to be a big volume player in the UK so we’re never going to be important to those big players. Even if we grow out volume to 30,000-40-000 units again, that’s quite a lot for us, but it’s still not much for a big group to deal with.

“I respect what they do but it doesn’t work with our franchise.”