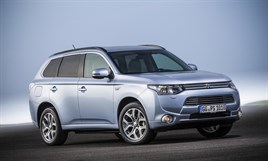 Mitsubishi is using some of its £20 million marketing budget for this year to sponsor documentaries on Channel 4.

The multi-million pound partnership for 2014 launched on April 29 with Mitsubishi’s sponsorship idents visible around the launch episode of new series Mr Drew’s School For Boys.

All idents feature the voice-over “Mitsubishi - changing perceptions with documentaries on 4”.

This deal marks the first time Mitsubishi has been on TV since 2009 and follows on from its announcement that it will be pricing its new Outlander plug-in hybrid model at the same price as the diesel model in the UK at £28,249.

The price includes the £5,000 Government plug-in car grant. The PHEV is priced in line with the equivalent mid-trim diesel GX3 model.

Lance Bradley, Mitsubishi Motors in the UK managing director, told AM is expecting the deal to bring a surge of volume to Mitsubishi dealers in the UK and he believes they are prepared.

Bradley said: “There are some manufacturers that are making big plans with their hybrid vehicles and this will throw them into disarray.

“We’re a small niche player and we can do something like this, create a bit of a stir.”