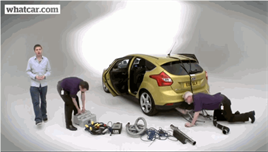 New car buyers who trust official, government-sanctioned fuel economy figures will pay an average of £1,000 more than they expect on fuel over a three-year period, according to What Car? 'True MPG' test results.

This is because the official figures are achieved under laboratory conditions that can rarely be replicated in the real world.

What Car? 'True MPG' data is calculated by engineers, who drive test vehicles over a variety of real roads, including motorway, A and B roads and through towns and villages.

Since launching 'True MPG' two years ago, What Car? has tested almost 400 cars in real-world conditions, achieving economy figures that are an average of 19% lower than the Government figures.

What Car? editor Jim Holder said: “With such a discrepancy between the official figures and our real-world data, it’s clear that the official test processes need to be updated so that car buyers can place more trust in the figures they are being told.

“In the meantime, car dealers and the car industry aren’t obliged to advise consumers about fuel economy beyond pointing at official statistics. However, we’d like to see more transparency at play, with dealers pointing to True MPG to give customers a realistic expectation of what fuel economy they can expect.”

"While dealers are entitled to do this, this stance means that customers will have little idea that they could be around £1,000 worse off than they expect after owning their car for three years."

Most efficient cars tested by What Car? 'True MPG' to-date

The What Car? 'True MPG' online tool (www.whatcar.com/truempg) allows motorists to select a car personalised to their driving needs and budget, and to accurately predict the fuel economy they can expect it to achieve.

The principle component of the testing equipment is a gas analyser, which measures carbon dioxide output (from which the g/km figure is derived).

From the carbon dioxide output and knowledge of the exact fuel in the tank, the fuel consumption in miles per gallon can be calculated via the mass balance method with a high degree of accuracy.

Throughout each test, the output of each gas is captured at intervals of one second, together with the engine performance readings from the engine control unit via the CANBUS. Further, a GPS unit and weather probe capture these readings at the same frequency.

Video showing how the testing was carried out: www.whatcar.com/truempg/how-we-did-it