Mitsubishi returns to TV with marketing launch for Outlander PHEV 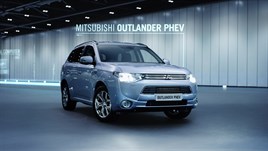 Mitsubishi Motors in the UK has launched its Outlander PHEV (plug-in hybrid) in its biggest cross media launch in its history.

The campaign, planned and bought by Manning Gottlieb OMD, kicks off with the advertiser’s return to TV spot advertising after a five-year hiatus.

The first spot since 2009 will air at 21:50 this evening in Gogglebox on C4, and also in the Champions League final - on Saturday evening at 19:35, the last break before kick off on ITV. The advert will also show on Sunday at 19:30 during Britain’s Got Talent on ITV.

The campaign, preceded by the announcement of Mitsubishi Motors in the UK’s sponsorship of Documentaries on 4 last month.

It features the vehicle coming to life and driving along a futuristic timeline. It passes major inventions and discoveries in history such as the wheel, electricity and environmentalism before taking its rightful place at the head of the timeline.

The London commuter audience will be targeted with coverage at premium and landmark sites across the city’s road and tracksides, including the two towers East and West, and the use of train station specific commuter messaging via JCDecaux’s Print IQ system.