Jardine Motors' dealership Wolverhampton Audi has retained its position as the top Audi dealer in the country for an unprecedented second year in a row, achieving first place with highest scores on the Audi balanced scorecard (Q-Power).

The award was presented at Audi’s dealer awards.

Jason Cranswick, head of customer quality and network development, Audi UK, said: “The national Q-Power Audi awards are how we measure performance across all of the UK network.

"The great thing about this measure is that it looks across the whole business and includes a host of contributing factors such as sales, customer satisfaction levels and, very importantly, getting the job done right first time for our customers.

"This centre has won the coveted award for two consecutive years, not only demonstrating its absolute dedication and focus on achieving exceptional standards, but also its consistently strong service delivery."

"Congratulations to head of business at Wolverhampton Audi Steve King and our thanks to Jardine Motors Group for setting such a strong benchmark for the entire Audi UK Network.”

Mark Herbert, chief executive, Jardine Motors Group, said: “To retain the position as top Audi Dealer in the Country, building on the success of last year is a truly fantastic achievement.   I would like to extend my thanks and appreciation to Steve and his team for their continued hard work, commitment and positive attitude.

"Audi are a key strategic partner for Jardine Motors." 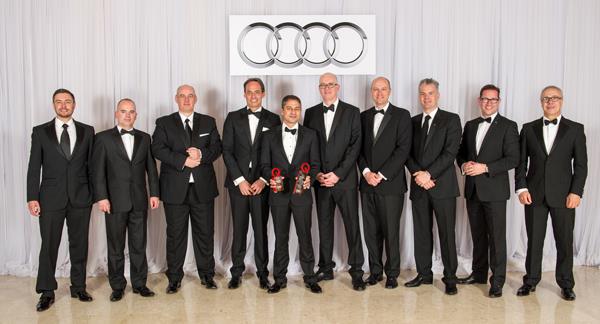