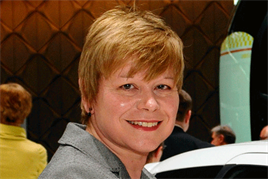 Linda Jackson (pictured), managing director Citroën UK & Ireland, has been made the global head of Citroen.

Appointed chief executive for the Citroën brand with effect from June 1, Jackson will replace Fréderic Banzet who is taking up a senior role in FFP (Société Foncière, Financière et de Participations, a France-based holding portfolio company and shareholder of PSA Peugeot Citroën).

She has more than 35 years’ experience in the motor industry in a variety of financial and commercial roles, and has held the position of managing director of Citroën in the UK since 2010.

Jackson is the first woman and non-French native to be given the role, a spokesman said.

Also effective on June 1, Yves Bonnefont will become chief executive for the DS brand to "accelerate the development of DS as a premium brand in its own right". He is currently director of strategy for the group and deputy CEO for the Citroën brand.

Jackson and Bonnefont will be responsible for implementing the 'Back in the race' strategic plan for their respective businesses and will be members of the executive committee reporting directly to Carlos Tavares, PSA Peugeot-Citroen chief executive.

A further announcement concerning Linda Jackson’s replacement in the UK will be made later.