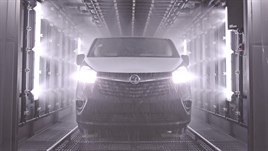 Vauxhall has produced a new marketing video for its Vivaro van which shows the new model making J-turns, handbrake turns and driving on two wheels to showcase agility and durability.

Mike Wright, plant director, said: “As Britain’s largest LCV manufacturer, we want to ensure that every customer receives the very best van that we can produce, and that means putting it through the most demanding manoeuvres we can think of."

The video suggests to customers that each van is put through some serious manoeuvres before it makes its way off the factory line, with the official test driver known as 'Stig-aro'.

Vauxhall will be hoping the video will go viral to showcase the Vivaro before its launch later this year, priced from £17,995.

New Vivaro production starts this summer, with 40% of its components coming from UK suppliers, many of whom are new to the company.