Twizy and other quadricycles crash tested 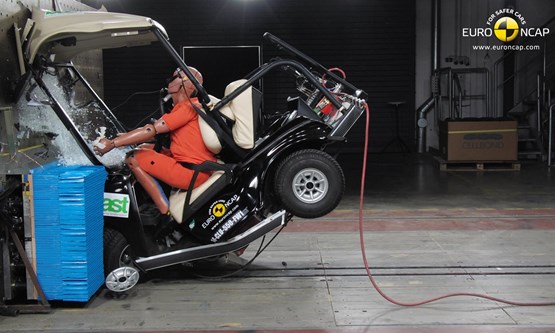 EuroNCAP has highlighted the poor occupant safety provisions of road legal quadricycles such as the Renault Twizy and Ligier IXO in comparison to cars.

A small market has emerged in Europe for quadricycles, small and fuel-efficient vehicles used in rural or urban areas as an alternative to motorbikes or city cars.

Although street-legal, quadricycles do not have to pass any of the rigorous crash tests to which cars are subjected.

Michiel van Ratingen, Euro NCAP secretary general said: ‘It’s worrying to find that, because crash safety tests are not required by law, quadricycles show a level of safety that is way below that of cars. Even though they meet legislative standards, these vehicles lack the minimum safety equipment which has become commonplace on passenger cars sold in Europe."

The vehicles were scored primarily on data from crash dummies but penalties were also given for poor performance of the structure or restraints.

The Ligier and the Tazzari had major failings of their restraint systems in the frontal test. In the Ligier, the upper connection of the driver’s seatbelt pulled out of the structure, leaving the dummy unrestrained and leading to a high risk of injury. In the Tazzari, the driver seatbelt broke and the driver’s head hit the steering wheel with a force that indicated a high risk of serious or fatal injury. The structure of the Club Car virtually collapsed in the frontal impact.

The Renault Twizy - the only vehicle of the four tested to have an airbag as standard - scored best but its stiff structure and restraint system resulted in some dangerously high dummy readings.

"Our test campaign confirms that quadricycles generally provide a much lower level of safety than regular passenger cars. The poor results, however, urge us to ask ourselves whether consumers should really be satisfied with the protection currently being offered?

"As quadricycles look set to become more and more popular, Euro NCAP is calling for manufacturers and legislative authorities to ensure a minimum level of crash safety for this vehicle segment," added Van Ratingen.