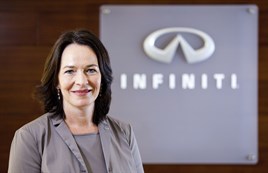 She will have global responsibility for Infiniti sales and aftersales, fleet sales, retail network development, and sales and product training.

Wuest will be based at the company’s global headquarters in Hong Kong and report directly to Johan de Nysschen, president, Infiniti.

She joins Infiniti from the BMW group where she has most recently been the regional head of Mini Asia-Pacific and South Africa.