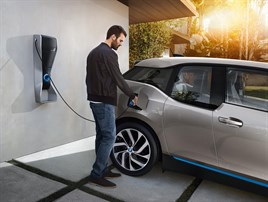 The original scheme - introduced in February 2013 - offered a 75% grant towards the cost of installing a home charge point, up to the cost of £1000.

Last month, however, OLEV changed the terms of the scheme, and reduced the maximum funding level to £900.

Suppliers such as British Gas used this subsidy to offer charging points, with installation, for free - on condition of anonymous usage data being sent back to the supplier.

Since the change, British Gas has reacted by introducing a £115 installation charge for the unit.

The firm's website says: "Further to the Office of Low Emission Vehicles’ recent announcement to reduce the subsidised funding for electric vehicle home charge points, we can no longer offer a charging point free of charge.

"Our new price for a subsidised charging point is £115 (including VAT) for the 16 Amp data-enabled charging point (4.5m cable) with a recommended connector that’s most suitable for your own specific vehicle."

At present, the websites of other companies such as Chargemaster are still offering a free unit, although it is unclear if others will follow British Gas' lead.

The new scheme - with reduced funding - is due to run until March 31 2015, or until exhausted.