Audi is set to launch its first e-tron model toward the end of 2014, when the A3 e-tron goes on sale.

This plug-in hybrid uses a 1.4-litre TFSI turbo petrol engine coupled to an electric motor to deliver 201hp. It’s enough to power the A3 e-tron from 0-62mph in 7.6 seconds while offering 35g/km CO2 emissions.

It can travel at up to 81mph or cover a maximum of 31 miles on battery power alone.

Audi claims a combined average economy of 188mpg for the A3 e-tron and it can be fully charged from a domestic socket in two-and-a-half hours.

Prices have yet to be confirmed for the UK, but the A3 e-tron costs €37,000 in Germany, so expect a similar price tag in pounds.

However, customers will be able to deduct the £5,000 Plug-In Car Grant from that figure.

Audi has plenty more hybrid technology planned and the next generation of Q7 that arrives in 2015 will be joined by a plug-in hybrid model in 2016.

There will also be plug-in hybrid versions of the next generations of A6 and A8, but Audi has ruled out a hybrid or EV A1.

Conversely, the company is considering a low-volume electric sports car based on the Quattro Sport Concept car shown at the Geneva Motor Show earlier this year.

BMW has stolen a march on its premium rivals with the launch of the i3 in EV and RE (range-extender) guises, while the i8 hybrid supercar is available to order now from £99,845.

However, this is not the full extent of BMW’s plans and it will launch a plug-in hybrid version of the X3 and X5 SUV models in the next two years.

The company says the X5 plug-in hybrid will offer 47g/km CO2 emissions. The ActiveHybrid 3, 5 and 7 Series models will continue, but BMW is also looking at an i5 model to offer families more space and practicality than currently available in the i3.

While BMW is allied to hybrid for the time being, it also says hydrogen power is a long-term goal and expects EV, hybrid, hydrogen, and petrol/diesel models to account for 25% of its sales each by 2025. 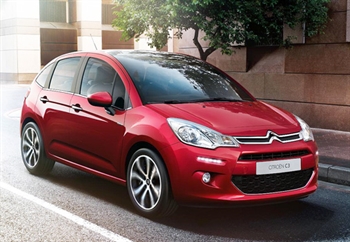 The French manufacturer says it is looking at hybrid options, but has no firm plans about which direction it will take. However, Citroën will launch a Hybrid Air model in 2016, probably in a version of the C3 (right).

Hybrid Air technology uses a conventional petrol engine in conjunction with a hydraulic pump that is powered by compressed air. Using regenerative braking in a similar way to most petrol- or diesel-hybrids, Citroën’s system fills a tank with compressed air under braking. This stored air is then released so the car can run on air only or a combination of petrol and compressed air.

Citroën says it has seen 97mpg average economy and CO2 emissions of 69g/km with a development C3. 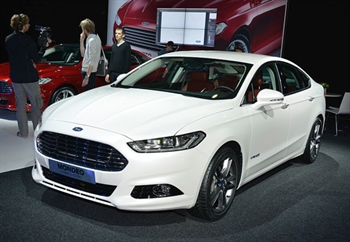 A facelifted version of the Focus will bring with it a revised Focus BEV (battery electric vehicle), but under the skin the electric Focus will remain the same as the outgoing model. This power train will also find its way into the Focus-based C-Max within two years.

More intriguing is the arrival of a plug-in hybrid model of the new Mondeo (pictured), which will be available to order from late 2014 and on the roads in the UK for early 2015. It will use a 2.0-litre petrol engine and an electric motor to give a combined 185hp. Ford has yet to confirm economy and emissions figures, but we can expect to see sub-100g/km CO2 and more than 65mpg. Ford is also expected to offer a version with a larger battery pack to allow up to 20 miles of driving on electric power alone.

Ford is set to launch its Edge in 2016, which is a full-size SUV. It will be offered in petrol-electric hybrid, petrol or diesel options. 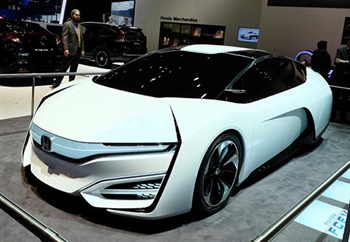 Honda will replace its current FCX Clarity with the FCEV (pictured). The hydrogen-fuelled Clarity is not sold in the UK as there isn’t the fuelling infrastructure to support it, but the FCEV will reach the UK in 2015 as a five-seat family car.

Honda is still debating whether to bring its Urban SUV Concept to Europe in production form. Unveiled at the Tokyo Motor Show in 2013, the Urban SUV is similar in size to a Nissan Juke and is based on the platform that will underpin the next Honda Jazz. The hybrid model uses a 1.5-litre petrol engine and will offer sub-100g/km CO2 emissions.