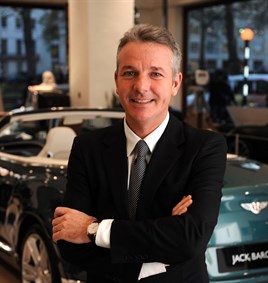 The company, which delisted from the stock exchange earlier this year after Berjaya Philippines Inc acquired a controlling share, announced this morning that Doyle has stepped down from the role with immediate effect.

HR Owen's board has appointed an executive committee, led by company chairman Mehmet Dalman, to run the business "whilst the right long-term arrangements are considered", it said.

In its statement, Doyle said: "Now that the business has seamlessly transitioned from a public to a private entity I believe it is the right time to move on. The performance of the company has markedly improved in the last three years due to the marvellous commitment of all of my colleagues within the company.

"I know the business will continue to go from strength to strength under my management team, all of whom will stay in place.”

Dalman said: "We’d like to thank Joe for the leadership he has shown to the business through its transition to a private entity and wish him every success for the future."

Last year's takeover bid for HR Owen by Berjaya Philippines Incorporated, which is headed by Malaysian tycoon Vincent Tan, saw it take control but fall short of acquiring 100% of the company's shareholding when Bentley Motors declined to sell its 28% stake.

Bentley has been a stakeholder in HR Owen, which operates the world's most successful Bentley dealership, Jack Barclay in London, since 2008.