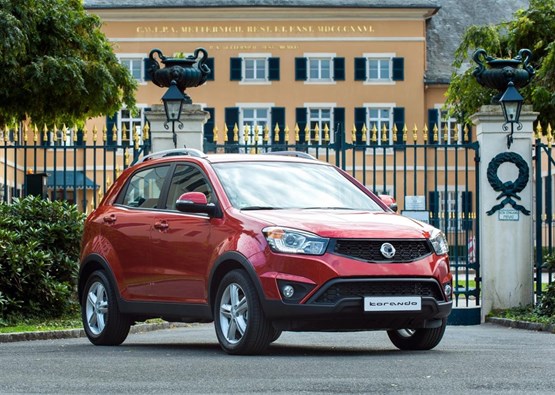 SsangYong is back in the ascendancy, after several challenging years following a restructuring. It is aiming for growth in the UK driven by new models and adding more dealers to its network.

The brand’s best year in the UK was 2006, when there were almost 2,000 registrations, although 2014 is looking positive with more cars registered by the end of July than in the whole of 2013.

SsangYong is perhaps less recognised than other South Korean brands in the UK, and its specialism in 4x4 vehicles has meant it has been establishing the brand in a niche. The SUV sector is currently the fastest growing in Europe and SsangYong could be in a strong position to capitalise on that  growth with revisions to its current range and the addition of a completely new model.

The majority of registrations in 2015, like this year, are expected to be the recently revised Korando C-segment crossover, with an estimated 1,000, with a similar number next year.

But the big boost in 2015 is likely to come from a new compact car, code-named X100. It will be a B-segment crossover and the smallest car the brand has offered in the UK to date, bringing new customers to the brand.

The rest of the SsangYong range has been updated in 2014, with facelifts for the Rexton SUV and Turismo people carrier early in the year, while new powertrains for the Rexton, Korando, Turismo and Korando Sports pick-up will be introduced late in 2015.

SsangYong believes these model changes and introductions will increase sales, along with a growing dealer network.

Marketing activity during 2014 has a particular focus on towing and especially the caravan market, cultivating a strong relationship with The Caravan Club.

The company also has a presence at outside events and shows as the company believes that potential customers respond to seeing the product in the flesh.

There is also support for used cars with a marketing programme and funding lines for used vehicles. SsangYong says it provides strong margins for its dealer network without holdbacks, but it doesn’t run a composite programme.

It also says morale is very high throughout its retailers. The network is largely young, according to the company, and dealers have joined to be part of its growth.

The minimum investment required works out at about £12,000 requiring special tools, diagnostic equipment and an initial parts kit, while signage is leased.

Steve Durkin Vehicle Services took on the SsangYong franchise in June 2013 after a 25-year absence from the franchise dealer arena.

“We watched the brand’s growth in 2012 and since taking on the franchise I’m very pleased,” said Steve Durkin. “The company has been very easy to deal with and the franchise has been profitable.”

“We’ve marketed quite heavily, but customers like the package, which includes a five-year warranty and we’ve also thrown in free servicing. Although the warranty claims have been very few.”

The dealer was the UK’s top-selling SsangYong centre last year. “The price, quality and package is compelling and it’s quite difficult for customers to say no. The range is expanding, which will help attract more customers.”

Learn more about this manufacturer on SsangYong's AMi page. Dealers can register here for a free AMi membership.