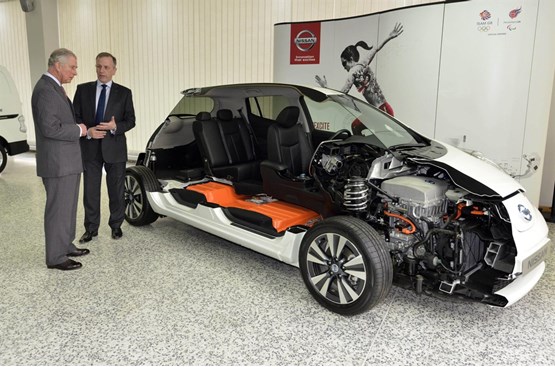 The Prince of Wales has visited Nissan’s Sunderland plant to see production of the Nissan Leaf and to learn about the job-creation programme; Nissan Skills Foundation.

His Royal Highness received a full tour of the production line and also met apprentices and employees involved in the project.

The Leaf went into production at the plant in 2013 and was the world’s first mass produced 100% electric vehicle and has sold 33,000 vehicles in Europe and over 158,000 vehicles globally.

Nissan Europe Chairman, who hosted The Prince, Paul Willcox said: “We were honoured to receive a visit from The Prince of Wales.

“With a keen, lifelong interest in sustainability, His Royal Highness was interested to see LEAF production as well as hear about Sunderland’s achievements as one of the UK’s most successful car plants.”

The Prince of Wales also visited Nissan's Global Training Centre, which is part of Gateshead College’s Skills Academy for Sustainability, Manufacturing and Innovation.

Nissan's vice president manufacturing Kevin Fitzpatrick said: “Nissan launched the Skills Foundation last year with the aim of using everything from electric vehicles to Formula One to encourage young people to take up careers in manufacturing and engineering.

“As one of the region’s largest employers it’s important that Nissan take a lead role. I was delighted for the opportunity to show The Prince of Wales just some of the activities that we offer the region’s schools.”

The Prince also met with pupils from Gillas Lane Primary School in Sunderland, St Cuthbert's in Newcastle and the Venerable Bede, Sunderland who were taking part in Nissan Skills Foundation activities which include the Industrial Cadets program.

Inspired by His Royal Highness back in 2010, the Industrial Cadets program helps to raise the awareness of the job opportunities that exist in the manufacturing sector. So far over 100 local secondary school children have already completed the course at Nissan with another 100 due to take part during this academic year.

Check out footage of the visit here: