Annual new car sales in Europe increased by 5.3% in 2014, with monthly sales growth throughout the year compared to 2013. December sales were 5.0% higher than a year earlier, suggesting the trend remains positive. 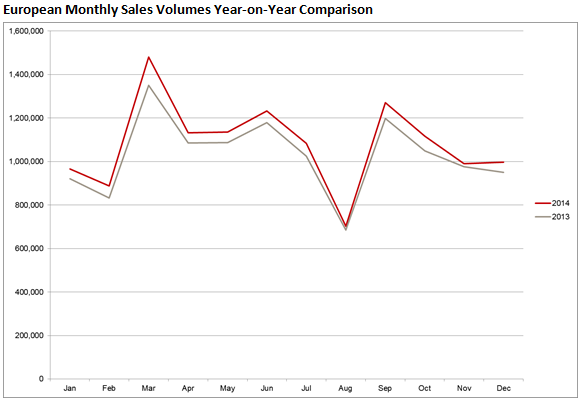 December sales totalled almost one million units, 5.0% higher than a year earlier. Of the 29 markets analysed, 24 recorded volumes higher in 2014 than in 2013.

Portugal and Ireland recorded the greatest percentage increases, while the greatest unit growth occurred in Great Britain and Spain. The remaining 'big five' markets of France, Germany and Italy also recorded increased sales for the full year, although France grew only 0.3% and its December volumes fell below those of a year earlier. 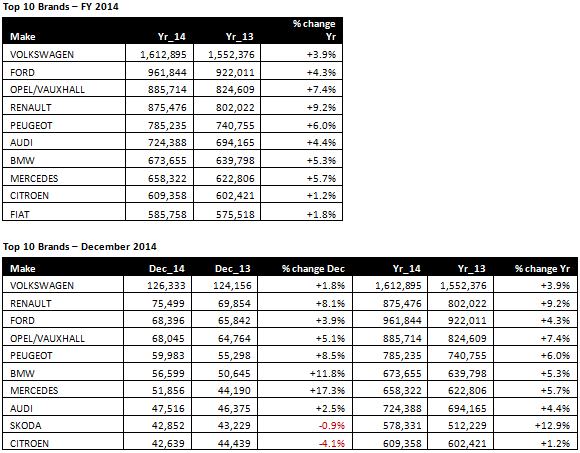 Volkswagen remains the dominant brand by volume, recording just over 1.6m units for the year and 67% ahead of second placed Ford, despite a small loss of market share.

Opel/Vauxhall, Peugeot and Renault complete the top five for the year. Renault claimed second place in December, and recorded the greatest annual increase in unit sales for the year of all brands thanks to the success of its Captur small crossover and fourth generation Clio small car.

Mitsubishi increased its annual volume by 24.4%, with the Space Start/Mirage, ASX and Outlander all contributing.

Jeep saw its volume increase by 67.9% due to new product offerings of the Cherokee and Renegade.

Tesla sales grew by 121.2% as the number of outlets and market acceptance of its all-electric Model S increased.

Maserati recorded growth of 267.7% as the new Ghibli and latest Quattroporte models attracted new customers to the brand, helped significantly by the availability of the brand’s first diesel engine.

The Volkswagen Golf consolidated its lead of the market, held since 2008, and increased full-year sales by 11.1% over 2013.

Second place was more closely fought, with the Ford Fiesta taking the position for the full year, ahead of the Renault Clio, Volkswagen Polo and Opel/Vauxhall Corsa, while the Clio and Polo placed ahead of the Fiesta in December.

Only two of the year’s top 10 models, the Ford Focus and Peugeot 208, recorded lower sales than in 2013, with the 208 slipping out of the monthly top 10 chart in December.

Meanwhile Peugeot’s newer and larger 308 model continued its climb up the chart in December, demonstrating the demand for new products and the continued strength of the Peugeot brand.

The Renault Captur’s appearance in the December top 10 shows how strong the market for small crossovers has become, this being backed up by strong sales throughout the year of the Opel/Vauxhall Mokka and Peugeot 2008.

Seat’s Leon, with the addition to the latest generation of both 3dr hatchback and estate body types to the previous 5dr hatchback, has recorded sales up 57.4% on 2013. Dacia’s Duster SUV increased sales by 46.1%, while the brand’s Logan saloon and estate recorded an increase of 92.2%.

“The Golf’s continued domination of the European new car market is impressive and it was the best-selling car for the 7th consecutive year,” commented Brian Walters, vice president of data at JATO Dynamics.

“But the market is still receptive to new entrants, as the strong performance of small crossovers such as Renault’s Captur has demonstrated. Meanwhile, a full calendar year of growth in the market shows there is continued consumer confidence in Europe. “ 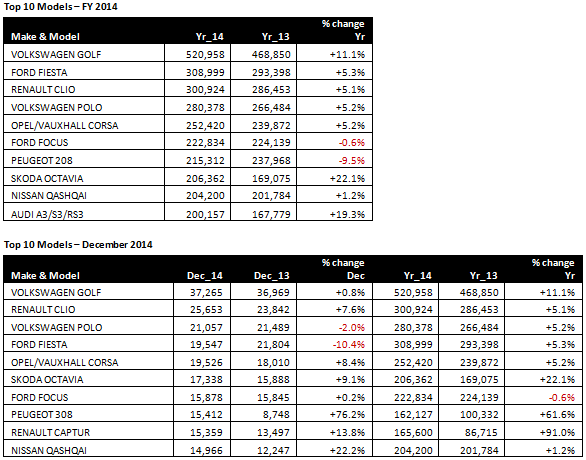