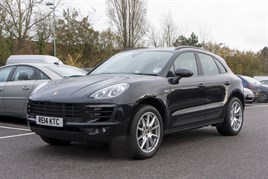 The Porsche Macan sports car is defying depreciation in the current market, according to industry experts CAP Automotive.

Demand for the model is so high that dealers have been barred from offering customers a hefty instant profit to sell it back to them.

Motorists who have run a Porsche Macan for several months are looking at potential profits running into thousands, if they choose to sell, effectively turning motoring costs into a significant investment return.

CAP car pricing expert Tim Bearder was told by one dealer that the only thing stopping them immediately offering to buy Macans back from customers on the same day they were sold was that Porsche forbids such a move.

Bearder said: “There have always been a few cars that fetch more than their original cost new, when demand seriously outstrips supply.  But we’re usually talking about situations where someone is lucky enough to be able to afford to spend £75,000 plus on a rarity, classic or supercar.

“But the Macan, starting at just under £44,000 for a standard diesel model, costs much less new than any car that would normally guarantee you no depreciation or even a return on your investment.

“Demand for the Porsche Macan began well before its launch in March 2014 and the waiting list reached almost two years in some cases. Typically, dealers will quote you around 14 months to guarantee you a car.

“Our research indicates that every used Macan currently advertised in the retail market is priced above the original manufacturers cost new, even when you take all the additional fitted options into account.

“Perhaps the biggest winners in all of this are those specialist dealer owners who were able to get their hands on the first models early on.

“The only thing that will change this situation is if Porsche decides to increase the number of Macans they produce, so that supply matches demand.

“Whether they will or not remains to be seen. But the value of the Macan’s reputation as a car that pays you to drive it is probably worth more in the long term to Porsche than the additional revenue they would generate by selling more of the cars.”