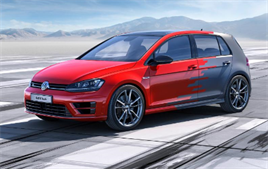 Car manufacturers have been demonstrating the full extent of their ability to harness the internet’s potential at this year’s Consumer Electronics Show (CES).

Self-driving cars had their strongest presence to date at the annual technology trade show held in  Las Vegas, while the ability of ‘connected’ vehicles to  revolutionise a driver’s experience behind the wheel was also firmly in evidence.

Among the many innovations on display were: gesture controls, which enable drivers to operate equipment by making movements detected by in-cab sensors; smartwatch apps which allow cars to be started and monitored remotely; and manufacturer-led collaborations intended to stamp out crashes between cars and cyclists.

Martin Winterkorn, chief executive of Volkswagen AG, said: “The two inventions of the century, the car and the computer, are gradually converging.

“We need to design future mobility to be even more intelligent and networked.”

In addition, VW showcased how electric cars - like its e-Golf - will be able to automatically dock to inductive charging stations in the future.

Hyundai also used CES to showcase its own hand-gesture recognition system called the cockpit concept, which enables the driver to use simple hand gestures to select a range of functions, including playing and pausing music, advancing to the next track or returning to the previous track.

In addition, the Korean manufacturer launched its cloud-based Blue Link platform which allows vehicles to be started remotely through devices like smartwatches and smartphones.

During CES 2015, Ford also announced its Smart Mobility initiative which aims - over the coming decade - to target the problems linked to greater urbanisation and the global growth of a car-owning middle class.

The company’s vision is based on connectivity, mobility, autonomous vehicles, the customer experience and big data.

London will be the site of several Ford pilot projects that will test different ways of alleviating congestion in dense urban areas including: car sharing, parking and shuttle service projects.

Audi was another manufacturer that used CES to showcase its ongoing investment in self-driving cars.

It arrived at the show with an Audi A7 3.0 TFSI which had made much of the 560-mile journey from California's Silicon Valley to Las Vegas on autopilot.

Meanwhile, Volvo used the show to demonstrate how it is working with protective sports gear manufacturer POC and mobile broadband internet company Ericsson to create safety technology that connects drivers and cyclists for the first time.

The technology consists of a connected car and helmet prototype that establishes two-way communication offering proximity alerts to Volvo drivers and cyclists which is intended to avoid accidents.