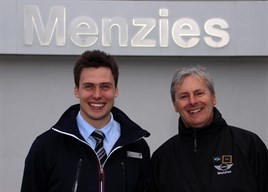 Their role is to welcome customers to the retailer and provide them with the information required on the different options available in each model range.

BMW tok a leaf out of Apple's book in 2013 with the launch of its network 'genius' programme.

Menzies' product geniuses will also take the lead in handing over the customer’s new car to them including explaining how to pair phones to the vehicle and use sat nav.

They will be available during retail hours for customers who have questions about any of the technology in their car to call in and ask questions or arrange an appointment to have an in-depth session.

Richard Hurran (pictured left) is the BMW product genius.  This is his first role within the motor industry having previously worked within retail.  Hurran recently returned to the area from Loughbourgh where he had been training as an athlete in pole vaulting and represented Scotland at the 2010 Commonwealth Games in Delhi.

Geoff Marr (right) joined Menzies as a driver in October 2013 and was promoted to the role of Mini product genius in December.

Marr is a Mini enthusiast having owned over 70 Minis.

"Having owned so many I am looking forward to sharing my passion for the product with customers and demonstrating the various options that are now available, from safety options such as active cruise control to the media pack that includes a 20GB hard drive that stores up to 40,000 songs in your car," he said.

Macrae & Dick has dealerships in Inverness, Elgin, Aberdeen, Perth and Stirling. It employs about 450 people and has the franchises for Ford, Honda, Jaguar, Land Rover, Toyota and Mazda and, under the Menzies brand, BMW and Mini.