Nearly two thirds of car buyers rank reliability as the most important quality when buying a new or used car, according to a new What Car? Motoring Panel survey.

The level of the finish and a car’s reputation for quality were the next most important factors that determined the choice of their current car.

One in two (52%) rated the availability of a discount as important or very important, and two in three (66%) said access to a dealer was important.

Relatively unimportant were the nationality of the brand and the CO2 emissions, while availability of flexible finance was rated of very low importance.

The What Car? Motoring Panel, consisting of more than 4,000 respondents, was asked to rank the importance of 29 factors which influenced its last car purchase.

Just 11% of private buyers considered flexible finance to be an important factor in their buying decision.

What Car? editor Jim Holder, said: “The What Car? Motoring Panel provides some incredibly insightful data. We didn’t necessarily expect reliability to be at the top of most buyers’ shopping lists and it was very interesting to see how relatively unimportant CO2 emissions were to buyers.

“Car makers are heavily influenced by buyer perceptions but it’s constantly evolving; priorities shift over time, but it is clear that despite leaps in terms of quality, the likelihood of a car letting you down is still at the heart of a car buyer’s criteria for a new vehicle.”

Underlining the importance of reliability, Warranty Direct, which partners with What Car? to conduct its annual Reliability Study, said the most reliable vehicles can cost less than £100 in repairs, whereas others will attract average annual  bills of £1,000 or more.

Warranty Direct’s 50,000 live policies show that only one in 10 of the most dependable vehicles break down annually, whereas the least reliable models fail several times per year.

Most and least important factors when buying current car 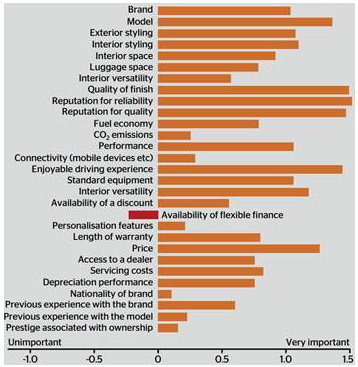