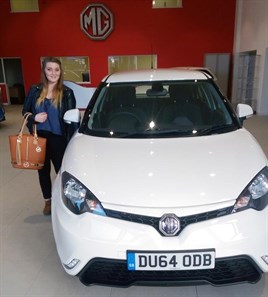 Budgen Motors has opened its first MG dealership in the form of a new £1million showroom in Telford, Shropshire.

The new 180sq m purpose-built site is based on Stafford Park 1 and includes a five-bay workshop.

The business also runs an MG aftersales workshop in Featherbed Lane, Shrewsbury with a further 14 bays.

Last year MG was the fastest growing brand in Britain and it looks as if motorists in Telford intend to keep it that way in 2015.

Managing director of Telford MG said: “We have been inundated with enquiries as soon as people heard we were going to sell MGs.

“We were thinking of having a party on the opening day, but we’ve had so much interest – especially with the new March registration looming – that we’ve had to put that back to April.”

MG’s dealer network is growing at the fastest rate in the brand’s 91 year history. Last year 24 new sales dealerships and two new aftersales dealers were appointed. The expansion will continue throughout 2015 and details of more new MG appointments will be announced in the coming months.

“It’s great to be part of the new MG success story. We’ve invested heavily with more than £1-million being spent on new showrooms and workshop bays and we have every confidence in the brand for the future.

“If our MG business grows the way we think it will, we could be looking to take on new people and all the early signs are that there’s a huge demand for MG in Telford and throughout Shropshire.

“The MG3 is an incredible value-for-money package and the MG6 is hugely underrated. Once people test drive the new MGs they are impressed by the quality, high specification levels, value and of course the way the cars drive and handle. It’s just great to see MG back,” James said.

AM Poll
Will new car supply be restored to normal levels in 2022? Please leave a comment
Vote
View all
2744