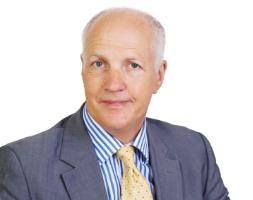 Author: Alastair Kendrick (pictured) is an employment tax specialist at MHA MacIntyre Hudson who works in their motor team assisting clients in the sector.  He was heavily involved in the negotiations over the rules when introduced in 2009.

"We have seen of late a number of articles in the automotive press about the compliance requirements of the car averaging scheme which applies in respect of demonstrator vehicles made available to employees.

The present arrangements came into place in 2009 and, in my experience since the introduction, we have not seen any major HMRC activity in the operation of these schemes.

In our experience given the lack of HMRC activity employers who operate this arrangement may have not reviewed their processes to ensure that these meet fully with what is required.  Getting this wrong could lead to an unwelcome tax bill on the part of the employer.

It is important to bear in mind that the car averaging rules are only available for those employees who have the 'right' to private use of a car but do not have a particular car allocated to them.

With this in mind the employer  will  need to visit any agreement they have with their employees over the provision of a vehicle to ensure this cannot be considered a 'allocated' car.

The rules require each separate franchise/dealership on a night of the employer's choice which is between the January 17-31 each year to perform the following steps:

Step 1. Identify the cars to be allocated to employees which need to be averaged

Step 2. Separate the cars at step one into the prescribed groups by reference to list price (see note below)

Step 3. Calculate the average price of the notional car in each group

Step 4. Calculate the average CO2 emissions and appropriate % of the 'notional car' in each group

Step 6. Identify the employees within these arrangements

Step 7. Allocate these employees to groups

HMRC in their manual cover off at EIM 23875 various practical issues which include employees who use a car of a different group and this states:

' No charge will be made for the replacement car (whether of a higher or lower group) if : -

HMRC has set out at EIM 23870 of their manual an example of how the return on completion of the steps above should look at the link on its website.

The split of cars by list price is determined as follows: 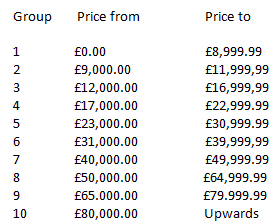 There is clearly an argument to suggest that the agreement does need to be considered further by HMRC given that the list prices of vehicles have increased significantly since 2009 so the bandings are in real need of change.

But until/unless these are changed we are required to operate within the present rules."