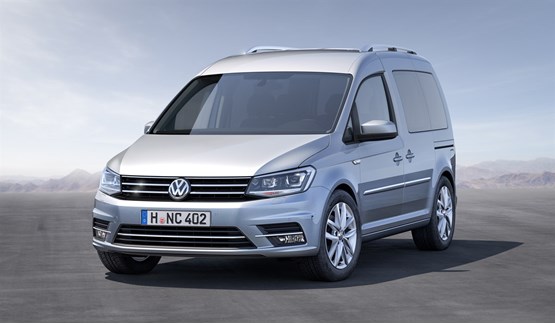 The third-generation model recorded more than 1.5million sales around the world during its eleven-year production and the new model has been completely refreshed with a re-designed front and new-look front and rear lights.

Recording the lowest fuel consumption is the Caddy Blue Motion panel van, developed for inner-city deliveries: Chairman of the board of management, Volkswagen Commercial Vehicles, Dr. Eckhard Scholz said: “With its low fuel consumption of 70+mpg, the new Caddy sets a new standard.”

New safety and comfort features to protect occupants and support the driver are also featured. Member of the board for technical development, Volkswagen Commercial Vehicles, Hans-Joachim Rothenpieler said: “To achieve this, we have incorporated a large number of driver assistance systems, which are unmatched in the urban delivery van segment.”

For the first time ever, adaptive cruise control (ACC) is an option on the Caddy van. Active at speeds of 0-100mph as an automatic (DSG) or 19-100mph with a manual transmission, it uses radar sensors to monitor the distance and relative speed to vehicles in front. When used in conjunction with DSG, the ACC system can also slow the vehicle down, for example in queues or traffic jam situations, to a complete stop.

The new Caddy will arrive in the UK later this year, full specifications and pricing will be announced closer the time.