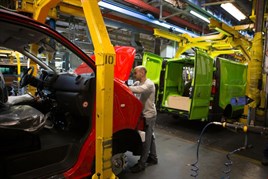 British cars are being made with more British-sourced parts as the UK automotive industry’s renaissance continues apace, according to a new Automotive Council report.

Currently around one third of the components in a UK-built car are domestically sourced, compared to more than 90% in the mid-1970s. However, vehicle manufacturing in the UK is undergoing rapid growth – British car production has increased by more than 50% since 2009, and this is creating new opportunities for domestic suppliers.

The report will be presented at the Society of Motor Manufacturers and Traders' (SMMT) Open Forum event in Leicester tomorrow – a day where automotive companies from across the country come together to discuss business opportunities.

SMMT chief executive Mike Hawes will tell senior industry executives at the event: “A strong domestic supply chain is critical to the success of the UK automotive sector. We want British suppliers to capitalise on the renaissance in vehicle manufacturing, and these figures show that positive strides are already being made.

“The work of the Automotive Council is central to this progress, and will continue to be while many component manufacturers still face issues such as access to finance and lack of incentives to innovate.”

The new Luton-built Vauxhall Vivaro van, which started production last year, contains more than twice the number of British-sourced components at 40% than its predecessor’s 16%. This means an extra £600million will be spent with British suppliers, allowing local companies to expand – and in some cases it has saved whole factories.

The report also identifies a further £4 billion-per-year opportunity for UK automotive suppliers to expand their business in the coming years.