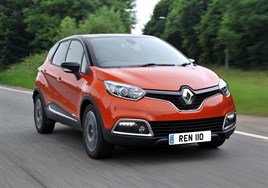 Renault is adding more power to its Captur crossover model in the form of a new 1.5-litre 108bhp diesel engine.

Introduced to the range for those customers wanting higher performance, it has a top speed of 109mph and a 0-60 of 11seconds. Combined MPG is at 76.4, while CO2 emissions are 98g/km – meaning free road tax.

The Euro 6 compliant dCi 110 engine will be available to order on Dynamique, Dynamique S and Signature versions of Captur from April 1, with prices starting at £17,695.

Captur was the best-selling model in the B-SUV segment across Europe in 2014, with 165,130 examples sold across the region. Of those, 20,466 were sold in the UK, making it Renault UK’s second best-selling model after the Clio, in only its second year, since being launched in the summer of 2013.