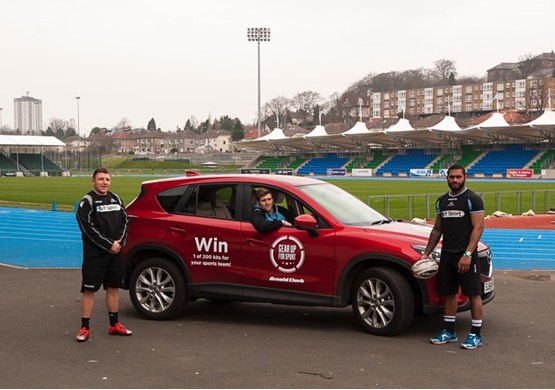 Arnold Clark has launched its Gear Up For Sport competition this week, where under-14s teams across the UK will battle it out to win a new sports kit for their club.

During the competition, Arnold Clark is also running the ‘Gear Up For Sport Challenge’ that sees well known teams across the UK taking part in a various sports challenges to raise awareness of the kit giveaway.

The Glasgow Warriors rugby team were the first to take on the challenge, at Scotstoun Stadium, with a cross bar challenge where players either kicked or threw a ball (depending on their skills) at a cross bar.

Managing director of Arnold Clark Eddie Hawthorne said: “The fact that a team such as the Glasgow Warriors are behind our Gear Up For Sport campaign means we can hopefully reach the audience who will really benefit from the competition.

“Gear Up For Sport is an initiative that looks to bring sport and communities together. The Glasgow Warriors reflect this in the work done through their Glasgow Warriors Community programme. As a UK-wide group, we see how tirelessly local sports clubs close to our dealerships work to raise funds for their kit. As a way to support that, we’ve doubled the prize fund to 200 team kits this year and look forward to seeing the creative entries that the teams come up with.”

The competition began on Monday and teams have until April 27 to enter a creative team photo to gear.up@arnoldclark.co.uk. Arnold Clark will select 40 finalists per region and voting will commence online from May 11. The 200 winning teams will be announced on June 10 at arnoldclark.com/gearupforsport.