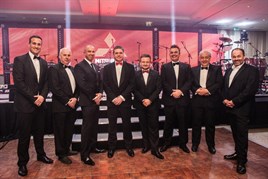 Devonshire Motors in Barnstaple, Devon, and Firs Garage in Hook Norton, Oxfordshire have both been named Mitsubishi Dealer of the Year.

The awards were held as part of Mitsubishi Motors’ annual conference for its UK dealers, at The Grove Hotel in Hertfordshire.

It was the second year in a row that Firs Garage was awarded the title.

Meanwhile, Humphries and Parks in West Malling, Kent, and Luscombe Motors in Leeds, West Yorkshire, both received New Dealer of the Year accolades.

Mitsubishi Motors’ UK managing director Lance Bradley said: “All these dealerships can be justifiably proud of their awards. They are shining beacons for the Mitsubishi brand and I’m delighted that they’re getting this recognition, which they richly deserve. My congratulations to them all.”

Mitsubishi Motors is seeing a strong and sustained period of growth. Its UK passenger car sales for February 2015 ­– the latest month for which figures are available – were up 178% on the same month last year, against a market that was up 12%, according to industry body the Society of Motor Manufacturers and Traders (SMMT).