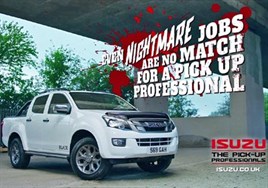 The Advertising Standards Authority has acted after seven complaints were made about the promotion which depicted the truck as the hero in a zombie-infested post-apocalypse city, and which featured in banner ads on websites including Isuzu UK's own, and as an in-game advert in the app Scrabble Free.

It was Isuzu UK's largest and most far-reaching online advertising campaign, created in partnership with Picture Production Company (click to watch the video).

The complaints were that it could be seen by children, as the adverts were served to a revision/study aid website, a local newspaper website and a currency converter website.

Isuzu UK said the targeting of their campaign was based on demographic and behavioural targeting, particularly males over 18 years of age, with an interest in cars, and there were safety restrictions put in place by the networks that meant the advert would not be shown in an environment or a website that was very clearly one for children, even if an adult that fit their user profile decided to go and look at a specific children’s website.

It acknowledged that the targeting method could not mitigate against scenarios such as if a child were to gain access via an adult’s device to the same browsing session as an adult, and if the child were to then visit a site that was not overtly designed for children. Within the constraints and safety measures put in place by digital networks, which were widely accepted and used on a daily basis by thousands of large UK advertisers and accepted by the industry, Isuzu stated that it was highly unlikely that a child would have been served the ad through the targeting method used.

However the ASA said: "Because the way the ad was targeted it could not take into account the possibility of a child and adult sharing the same browsing session, we considered that Isuzu had not taken the necessary precautions to mitigate the risk of a child viewing the ad, such as ensuring the ad did not appear on sites regularly used by children.

"Despite the targeting steps taken by the advertiser, because the ad appeared on a website regularly used by young teenagers, we concluded that it had been irresponsibly targeted."