Geneva Motor Show: Battle for SUV and crossover customers set to ramp up 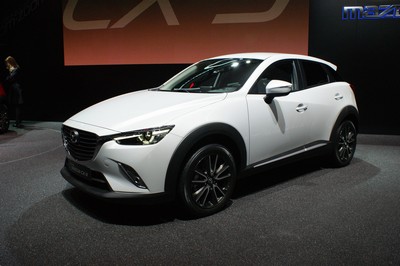 The battle for SUV and crossover buyers looks set to move into a new phase as carmakers previewed their new model lines at the 2015 Geneva Motor Show.

Renault revealed the Kadjar, its C-segment crossover which will go on sale across Europe this summer.

Thanks to the Renault-Nissan alliance, the Kadjar shares many components with the segment leading Nissan Qashqai, including the 1.5-litre and 1.6-litre diesel engines with CO2 emissions as low as 99g/km, and a 128bhp 1.2-litre turbocharged petrol. It will be offered in two-wheel drive and four-wheel drive variants, and has a 472-litre boot that is 10% bigger than the Qashqai’s.

Renault's head of design, Laurens van den Acker, said Renault sees this car as the big brother of Captur, not the sister of Qashqai.

Mazda showed the CX-3, its B-segment SUV that it hopes will echo the success of the larger CX-5 and steal sales from the Nissan Juke, Renault Captur and Vauxhall Mokka after it launches here in June.

It will be priced from £17,595 for the entry 118bhp Skyactiv-G petrol-engined two-wheel drive model in SE trim, rising to £24,695 for the range-topping 1.5-litre Skyactiv-D turbodiesel auto in Sport Nav trim and all-wheel drive.

Positioned like the CX-5 as a premium model for Mazda, even the entry Mazda CX-3 will come as standard with a touchscreen infotainment system, Bluetooth, alloys, air-con and heated powered mirrors, while mid-range SE-L versions add auto wipers and lights, tinted rear windows and front foglamps, and Sport specification brings 18in alloys, heated seats and a head-up display.

Hyundai revealed the Tucson, its replacement for the IX35 C-segment SUV and a return to a nameplate familiar to the Korean brand’s loyal customers. Due to reach showrooms in September, the Tucson is slightly larger than the IX35 and will be sold with a choice of two petrol and three diesel engines, all Euro6 compliant.

The 1.6-litre petrol engine will be available in both naturally aspirated and turbocharged forms, producing 133bhp and 174bhp respectively, and the diesel contingent is led by a 1.7-litre with 113bhp, plus two versions of the 2.0-litre diesel in both 134bhp and 181bhp forms, including a four-wheel drive version.

“This is not a direct replacement for the ix35 – it is a complete step change, a completely new vehicle,” Whitehorn said. He expects it to achieve 20,000 annual sales in the UK.

Audi displayed the new Q7, its large seven-seat SUV due on sale this summer, which will be followed by an E-tron diesel-electric plug-in hybrid version at the end of 2015.

Audi says that version will have an official fuel economy figure of 166mpg, including 34 miles on electric, and average CO2 emissions of 50g/km.

Mainstream versions of the new Q7, which is 370mm shorter and 325kg lighter than its massive predecessor, will come with either a 268bhp 3.0-litre V6 diesel or a 328bhp 3.0-litre V6 supercharged petrol engine with standard eight speed automatic transmission and four-wheel drive.

The diesel Audi Q7, with 149g/km CO2 emissions and 49.6mpg fuel economy, is expected to be most popular in the UK. Its towing capability is 3.5 tonnes.

Audi's sister brand Seat showed the 20V20 concept car, which it described as a four door coupe which blended elements of an SUV, and which hints towards the carmaker's first production C-segment SUV which will launch in 2016, based on the MQB modular platform used by the Leon.

Infiniti revealed the QX30 concept car, a production version of which is expected to come to the UK in 2016 ready to battle the Audi Q3 and BMW X1.

AM Poll
What is your take on the car retail sector's ongoing vehicle supply shortages? Please leave a comment
Vote
View all
3271