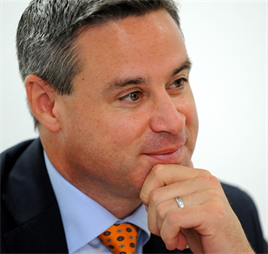 Car dealer group Lookers has announced its results, reporting a sixth year of successive profit growth and a record performance in its motor division.

Turnover increased by 5.3% on a like for like basis compared to the prior year benefiting from an increase in the vehicle parc of cars under three

years old, a trend which will continue following the increase in the new car market in the last three years. Aftersales margin has increased again from 42.5% to 42.7%, on a like for like basis.

Chairman Phil White said of the outlook for the year ahead: "The UK new car market has now benefitted from three years of strong growth which we now expect to stabilise.

"Our motor division has produced an excellent result during 2014 and we believe there are still further opportunities to develop our existing business in addition to benefiting from acquisitions made in 2014. The parts division has made good progress and has further potential for future growth and development.

"The new financial year has started well with group results to date being in line with expectations. We are therefore confident of delivering further growth in 2015." 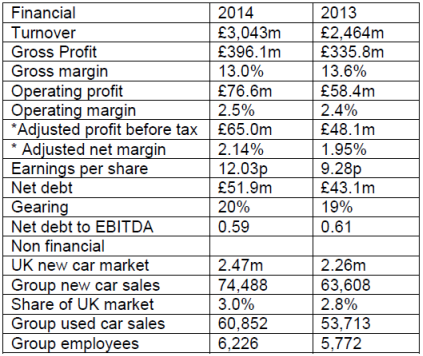 Speaking to AM, Lookers' managing director Nigel McMinn (pictured) spoke of the pressure being placed on dealers by manufacturers to hit "challenging" targets.

"One of the reasons we saw a dip in new car retail sales (5.1%) in January and a challenging February is because we were under enormous pressure to sell or tax whatever stock was on the ground, whether it was with customers or not. There has been a pull forward of business. Without this the start of this year would've looked a lot more healthy."

He said manufacturer targets for quarter one have "taken a leap" on the assumption there will be strong market growth this year. "Demand is still there in the market and our order take is strong, while economic conditions still point to a continuing confidence," McMinn said. "However, once March is out the way there will have to be a sensible discussion on realistic targets. While profits have been good, dealers have spent a lot of money on factilities, people and IT and these costs have to be covered by volume and margins."

McMinn stressed that while he acknowledged the volume targets are demanding, "we will come to a sensible agreement if they turn out to be too high".

Economic conditions that point to a positive market include the current strength of the pound. 2014 started at 1.2 euro to the pound and ended at 1.28. Yesterday it was at 1.38.

"A strong pound puts money in the manufacturers' pockets, allowing them to subsidise deals. I see no reason to see this support ending as the pound continues to get stronger."

Plans for the year include Lookers making further acquisitions. Cash flow is at £85m and even with a commitment to spend £55m on premises, there is funding available to acquire in an "orderly manner", ideally growing its premium brand representation in big cities and building on existing territories.

He also said PCP renewal rates were around 30 - 40% and service plan renewals had grown year-on-year from 33% to 40% on new and used cars. Both were areas for improvement in 2015. Finally, a new Lookers' website that will go live in about a month designed to increase the number of visitors into enquiries, supported by teams in every franchise division responding to email, live chat and phone enquiries, working together to move customers from "enquiry to appointment to sales".

"Our investment aspirations in the business, facilities and people begins with the website: if we don't have fantastic pictures and videos, transparent pricing offering the ability to value part exchange vehicles and investigate finance options, backed by dedicated specialists interacting at the appropriate moments offering the appropriate products, such as PCPs and service plans, it will all count for nothing," McMinn said.

"The group has made a good start to the current financial year, we have a healthy order book for the delivery of new cars in the important month of March and aftersales continues to perform well. We therefore expect the result for the first quarter to be in line with expectations.

This, together with the group’s strong performance in 2014 and the previous five years, provide a firm foundation on which to deliver further growth in the current year. The continuing increase in the vehicle parc of cars less than three years old provides further opportunities for increasing revenue in the high margin aftersales sector of the motor division. These factors, together with the broad base of our franchise representation leave us very well positioned for future growth.

The acquisition of Colborne should make a greater contribution this year and we continue to focus on the areas in which we can improve the performance of the group’s franchised outlets, such as used car sales. As in previous years we continue to target selective acquisitions to further improve our franchise representation.

The company has achieved outstanding growth in recent years and we believe the significant investment we are making in our facilities and multi channel customer experience will give us a competitive advantage and further improve our position of leadership in the motor retail sector.

The parts division has made good progress with increased profits, which together with continued investment in new product lines, improved facilities and systems, leaves the business in a stronger position for further growth and development. We also continue to seek appropriate acquisition targets in the parts aftermarket.

The group balance sheet continues to be strengthened by strong operational cash flow. We have substantial headroom in our bank facilities with net debt continuing to be closely controlled and net debt to EBITDA being at a lower level than last year. This provides secure funding capacity for several years and financial security to grow the business through further strategic acquisitions in both the motor and parts divisions."