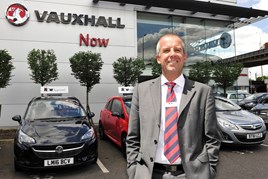 Now Motor Retailing has gone into administration, however its five Vauxhall dealerships have been rescued by PSA's own dealer group, Go Motor Retailing, and Eden Motor Group.

The deal adds Kingston, Heathrow, Hayes and Staples Corner to Go's existing operations, which now total 12 locations, many of which are in Greater London.

Last week Now Motor Retailing closed its Marlborough Vauxhall dealership, with nine jobs lost and the remaining staff relocated to its Swindon branch, which has now been bought by Eden, run by Graeme Potts.

Now Motor Retailing was approached by AM last month about suggestions it was in financial difficulties and up for sale, but declined to comment.

However administrators Smith & Williamson now confirm it "experienced financial difficulties due to a tough marketplace" and they were called upon to seek buyers "in a tight timeframe".

Weston said: "Our first quarter results across Go Vauxhall and Robins & Day have been promising and we have been able to maximise the opportunity from the four PSA brands to further improve our commercial results and ability to expand.

"Our relationship with Vauxhall has just begun, yet we can already see the opportunity with the brand and the model range especially the new Grandland X, which has opened a further channel in the important SUV sector.

"The addition of the four Now Vauxhall businesses will increase our ability to represent the brand in a core strategic market and we are confident with the new strategic direction of the Vauxhall brand to increase our volumes, customer satisfaction and profitability.”

The manufacturer-owned dealer group now operates 41 dealerships nationwide with a current total of 27 Peugeot, 14 Citroen, 7 DS and 12 Vauxhall franchises and a 2017 turnover of £885m, which would place it 15th in the AM100 rankings of the UK's largest franchised dealers.

Vauxhall’s retail network development director Alastair Cassels said: "Vauxhall Motors is pleased to have supported Robins & Day in their acquisition of the Now Vauxhall retail sites, ensuring a strong and sustainable future for the business and its employees."

The Surrey headquarters of Now Motor Retailing is being sold to a third party, said administrator Greg Palfrey, national head of restructuring and recovery services at Smith & Williamson.

He said the buyers of the five dealerships have helped to save many of the 250 jobs depending on a successful outcome for Now Motor Retailing.

Palfrey added: “It is a matter of public record that the retail motor sector is going through another testing time, with market forces outside the control of single brand and multi-brand dealerships, however well run they are with Now Motor Retailing being very profitable up until the end 2016.”

He paid tribute to managing director Jon Taylor and finance director David Challis, who both formed the company in 2006, for providing the Smith & Williamson team with “exceptional” support.

It is too early to state what money is owed to unsecured creditors, stressed Mr Palfrey.

A retail sales operation at Addlestone was relocated to Now Motor Retailing’s West Byfleet site in 2016.

A site run by the company at Abbot Close, West Byfleet, near Walton-upon-Thames, subsequently closed; operations were moved to the Heathrow site at Staines Road, Bedfont.