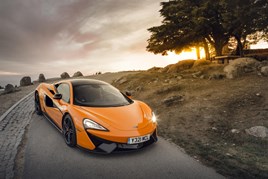 McLaren Automotive has delivered the promise of a wider warranty car parc with the introduction of a 12-year extended package for its new car customers.

The Woking-based supercar manufacturer’s extended warranty was launched as a seven-year option in 2014 but can now be renewed, with a 12 or 24-month product, up to the car’s 12th birthday.

McLaren said that the enhancement recognises the increasing number of McLaren cars on the road, with more than 3,000 vehicles today having passed their third birthday.

The McLaren Extended Warranty is available for Sports and Super Series vehicles and comes with unlimited mileage cover, roadside assistance in selected markets and, in the event of claim, guaranteed use of McLaren Genuine Parts fitted by fully trained McLaren technicians.

The scheme is available for all new, existing and approved-used McLaren Qualified vehicles that have covered less than 100,000 miles and have been owned for a minimum of 90 days.

Carl Whipp, aftersales director at McLaren Automotive, said:  “Owners want the reassurance that their car will still be looked after to the same standards with which it was built.  And they want to continue to enjoy their McLaren without worry.  Sometimes daily.

“It’s for them that we launched the Extended Warranty and now with this further enhancement to the coverage period, it will continue to give complete peace of mind … right up to the car’s 12th birthday.”