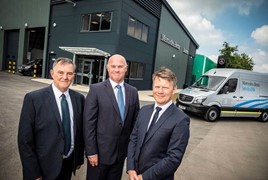 It is located at the edge of Taunton’s Crown Industrial Estate, a short distance from the retail dealership on Toneway where vans were previously maintained and repaired alongside Mercedes-Benz cars.

The new centre incorporates six bays with ramps – one of which has a 6.5-tonne capacity – as well as an MoT lane for testing vehicles in the Class 4, 5 and 7 categories.

The facility is open from 8am until 6pm weekdays, and until 1pm on Saturdays.

It took eight months to construct and is part of City West Country’s major programme of investment in its van servicing facilities by Mercedes-Benz South West.

After converting an existing building, the group also opened a new light commercial vehicle centre in Exeter in March. This, together with the Taunton development, now complements its established van service centres in Plymouth and Truro.

Mercedes-Benz South West has recruited three additional technicians for its latest workshop, while another new member of staff is working in a ‘front of house’ role. The operation is overseen on a daily basis by long-serving Chris Lloyd, a service team leader, with support from Taunton service manager Vince Ewing.

“The extra space means we can support the workshop with a broader range of light commercial vehicle parts. Car customers are benefiting, too, as its opening has relieved pressure on our main service facility.”

Green said the “cultural shift” behind the rapid expansion of the home delivery sector had led to an explosion in demand for van-related warranty work, servicing and MoT tests.

“As a result, whereas not so long ago we were selling between £1,500 and £2,000 worth of commercial vehicle labour hours a month, today the figure is approaching £10,000. That’s a five-fold increase which has necessitated some significant investments to ensure that we continue to meet, and indeed exceed, our customers’ expectations.”

He confirmed that opening hours at the new workshop could be extended to reflect continued growth of the van aftersales business. Staffing levels would also be kept under constant review, and there was every chance that further job opportunities would be created.

“We’re committed at Mercedes-Benz South West to a strategy of ‘growing our own’,” he added. “We’ll therefore be looking to recruit an additional apprentice this summer, who will be based at the new van centre.”