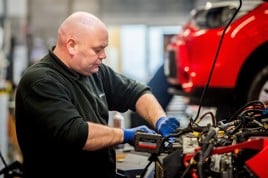 Decreased immigration, an ageing population and policies driving us to zero emissions vehicles are creating a major skills challenge for the automotive labour market, according to a new report from the Institute of the Motor Industry.

Its latest Automotive Sector Employment report warns of an escalating skills crisis and predicts 160,000 vacancies in the sector will need filling by 2031.

Despite forecasting a 2% decrease in the number of jobs available in the automotive industry by 2031, the report highlights that rising employment replacement demand - due to retirement, migration and occupational mobility – will significantly contribute to the expected and unprecedented number of available vacancies. The role most in demand will be the vehicle technician, which will account for 16% of vacancies.

Steve Nash, IMI chief executive, said, “The industry faces its biggest skills challenge of the last two decades. We have been lobbying government, the automotive industry and the education sector for a long time to invest in addressing the shortage in qualified EV technicians, and the majority have stepped up to the challenge. But our latest report worryingly reveals that the UK’s lack of EV skills are just the tip of the iceberg.

“An aging population is a significant contributor to the dilemma. Many of our older workers are set to retire over the coming years and fewer younger workers are joining the labour force. Without doubt, more needs to be done to attract young blood into the UK’s automotive sector.”

The IMI’s Diversity Task Force conducted a ‘Perception of the Automotive Sector’ survey to understand career misgivings and motivators about the industry. The survey was completed by over 1,600 school-aged children and young people from schools and colleges across the UK and 448 youth influencers, including career professionals.

Whilst over half of 16-18 year old survey respondents said they had a clear career plan, those in Key Stage 3 and 4 said they are particularly concerned about making the world a better place with comments made about improving the environment, better safety in the automotive sector and on vehicles, and a desire to help people.

However, just 16% said they had considered the automotive sector as an option.

Over and above common misconceptions about the industry, a lack of understanding about the range of roles, qualifications needed and salary expectations was a key factor.

Influencer respondents reported that a lack of local placements meant they were unable to satisfy young people open to pursuing a career in the automotive sector.

The IMI is exhibiting at this year’s The British Motor Show at Farnborough this weekend to highlight its concerns on the UK’s skills shortage and showcase the industry’s career opportunities for people of all ages, abilities, race, ethnicity, gender or sexual orientation.