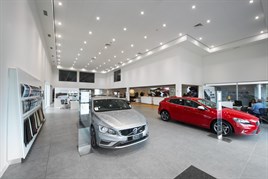 2015 marks a new dawn for Volvo. The coming years will see Volvo cars stand out from the rest of the market and win more buyers, says UK managing director Nick Connor.

It starts with the launch this summer of its new flagship XC90 seven-seat SUV, and will continue with a premium large saloon badged S90 and an estate, all off the same SPA platform, then smaller cars after that from a different platform, with V40 remaining its smallest model.

All the new introductions will include a plug-in hybrid powertrain as well as petrol and diesel units.

“For a long time we built cars that we perceived were chasing the German premium competition. It wasn’t really what we should have been doing, and within the Ford umbrella and PAG there were constraints on what we could do so as not to compete with its other brands. Now no-one is telling us what we can and can’t build.

“We’ve a clear idea of what we want Volvo to stand for and we’re building cars that reflect that. We have a new-found confidence which is clearly demonstrated in XC90 and you will see it in the new products that come through.

“This is not design that’s aping anybody else. We’re not trying to out-handle a BMW, or to do things just for the sake of being better than the competition on one particular product aspect.

“We’re trying to create a complete Volvo product offering that is luxurious, comfortable, safe, drives very well, has best-in-class powertrains and has a really unique and sophisticated Scandinavian design.”

He admitted the carmaker's brand values have been blurred in the past, and it had sometimes enjoyed more success creating sub-brands, such as XC90, than in promoting its own brand.

Connor said the Volvo V40 has already put the carmaker on a growth trajectory, and it is confident of sustaining that. He said V40 has allowed the brand to attract a customer younger than the historically typical Volvo buyer who is aged 50+. For V40, the average age profile is 43, and Connor is pleased that “the difficult-to-find 30-somethings” are finally buying Volvos.

Connor said Volvo has learned lessons from the C30 small coupe it sold through the turn of the decade, particularly that it needs to get its core range optimised before it considers “more off-piste” products that don’t do much for the bottom line. The UK was top market for the C30, with sales made mostly to empty nesters rather than the young professionals Volvo designed it for, but it was never going to be a huge market, he said.

Connor said he’d love to see a new open-top car added to the range at some point in the future, however it is not in the cycle plan. “Having said that, once we’ve done the bread and butter stuff maybe we’ll afford ourselves some little treats. C70 worked well for us as a halo car, it did well in the US and the UK was the second biggest market for it, but it’s not a priority,” he added.