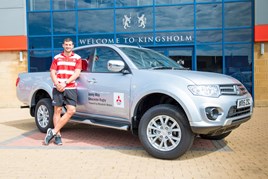 England Rugby and Gloucester wing Jonny May has taken delivery of a new Mitsubishi L200 at the club’s Kingsholm Stadium.

The vehicle was handed over recently and follows the announcement that Mitsubishi Motors UK is now the main partner of the Cherry and Whites.

The three-year partnership agreement will see the three diamonds Mitsubishi logo appear on the club’s playing and training shirts, replica wear, as well as significant branding around the stadium and on the pitch.

May, who came through the Gloucester Rugby Academy and has 13 caps for England, said: “The L200 Challenger looks great and I’m really pleased with it. I’m looking forward to getting behind the wheel. There’s loads of space in the back for all my rugby kit so that’s great. The new partnership with Mitsubishi is good news for the club and the relationship will only get better as we build on it going forward.”

Mitsubishi Motors UK has been a sponsor of Gloucester Rugby for eight years but the new partnership represents a considerable increase in commitment to the club, at a time when the Mitsubishi brand presence is growing rapidly in the UK.

A number of the club’s other players, including England number eight Ben Morgan, Scotland scrum half Greig Laidlaw, and the Wales pair of hooker Richard Hibbard and fly-half James Hook, are also driving Mitsubishis as part of the deal.