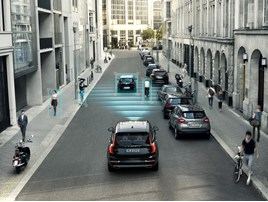 In the latest round of Euro NCAP safety tests, two vehicles that don't come with autonomous emergency braking (AEB) as standard failed to score five-star ratings.

The Mazda CX-3, which doesn't have AEB as standard, and the new Mitsubishi L200 pick-up truck, which is not offered with AEB, both missed out on the top rating achieved by seven other models in the latest results. Both models achieved four-star ratings.

The new L200 is sold as a commercial vehicle, but with an improved driving experience and many comfort and safety features on the double-cab model, it is expected to appeal to some customers who will trade in conventional cars or 4x4s. And although AEB is offered as an option on the Mazda CX-3, Euro NCAP says take-up by customers is expected to be low.

The luxury SUVs Volvo XC90 and Audi Q7 both performed well in Euro NCAP’s latest crashworthiness requirements, but it was the XC90 that made the biggest impression by earning full marks in the crash avoidance and driver assistance tests.

The top ratings for the VW Touran and Ford's Galaxy andS-MAX MPV siblings will be welcomed by buyers, offering at least two rear seating positions compliant with the latest i-Size standard for child restraints as standard.

The list of top achievers is completed with Renault Kadjar and the new Toyota Avensis, both delivering an excellent safety performance across the board.

Good occupant protection still is the back bone of a top rating in Euro NCAP, according to the organisation, but the availability and performance of avoidance and driver support systems, that will ultimately pave the way for highly automated vehicles, is becoming increasingly important.