Was this article useful?
2 people found this useful
11 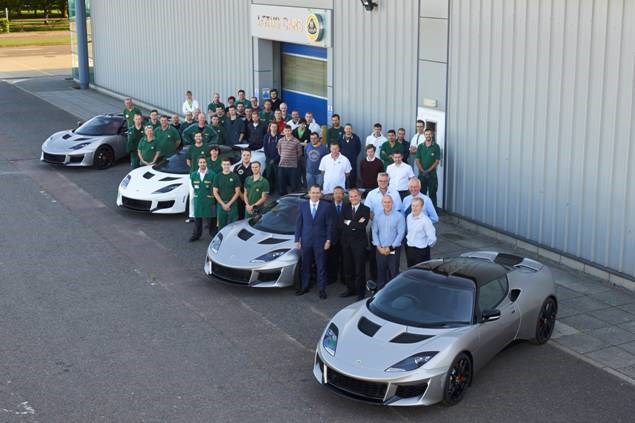 The first Evora 400 sports cars destined for customers and dealers have driven off the assembly line and are soon to arrive at Lotus dealerships across the UK and mainland Europe.

The occasion was marked by a small celebration with members of the engineering and manufacturing team at Lotus, who are responsible for hand-building Lotus’ fastest production car to date.

“In September and October, Lotus dealers throughout the UK and mainland Europe will be receiving their demonstrator and customers cars, so now is the opportunity for drivers to get behind the wheel and experience the Evora 400 for themselves.”

Over two thirds of the £72,000 Lotus Evora 400 is new, including its supercharged and charge-cooled mid-mounted 3.5-litre V6 engine which produces 400 hp and 410 Nm of torque. Such revisions result in a faster and dynamically more capable model than the previous Evora and are the reason Lotus says the new Evora 400 has become its most eagerly anticipated model for several years.

In Lotus’ testing, this performance and handling, combined with a maximum speed of 186 mph and acceleration 0-62 mph in 4.2 seconds, enables the new Lotus Evora 400 to lap the sports car brand’s test track at Hethel seven seconds faster than the previous Evora S, with a time of 1 minute 31 seconds.

In addition to this, the options list includes automatic transmission, cruise control, Alcantara or Leather trim upgrades and metallic paint.

A “Black Pack” option provides a distinctive look, with selected exterior panels including the roof, sills and centre section of the three-element rear wing in gloss black and a dark headlining in the interior. Lightweight forged alloy wheels can be specified along with optional yellow or black brake callipers.

Over the last 15 months, Lotus has increased its number of dealers worldwide from 138 to 193. In the UK, the network of 18 sales points was put under a review in 2011 and shrunk to 11 in 2014. It has since increased to 14 showrooms, with its newest appointment being Hexagon Lotus in London