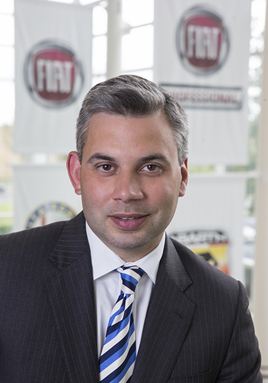 Alex Hughes, the new managing director of FCA Automotive Services, the UK finance arm of Fiat Chrysler Automobiles, is confident the continued growth in the UK’s economy and employment stability will mitigate any concerns with used car oversupply and a drop in residual values.

Formerly the marketing and sales director, Hughes has been with the business for 15 years and replaced outgoing managing director Alberto Merchiori at the start of September.

Hughes (pictured) told AM: “Customers are more protected now from any potential softening of used car values than in the past where they, as individuals, took on the majority of RV risk.

“Consumers in general are increasingly comfortable with the concept of not 'owning' a vehicle, so personally I think products like PCP and PCH are here to stay.”

Hughes said FCA Automotive’s PCP penetration is “generally very high” and that it had become the norm for customers buying new and now used too.

He said: “In the past buyers may have looked to spread their payments over five years in order to make the instalments more affordable, but the customer would look to settle the agreement after three or four years in order to change into a newer car.

“This left the customer bearing all of the risk as to what may happen with used car values during that period, and in the worst cases would end up trapped by negative equity.

"PCP allows the finance companies to bear that risk on behalf of the consumer, allowing them to finance the car over a change cycle that better matches their needs and aspirations, with the guarantee that if used cars values should soften then it’s the finance company that will bear the exposure.”

While PCPs are taking the lead in the retail market, Hughes said a major focus for the finance arm has been delivering growth within its contract hire business FCA Fleet Services.

Fiat found itself in 17th place within the top 30 fleet manufacturers by fleet registrations for the last two years in a row, with 2014’s performance totalling 24,195 units.

The group is looking to increase its presence in the highly competitive fleet market. In June this year FCA Automotive Services appointed Franck Gaillard to the role of fleet and contract hire director and he is curently in the process of building a team to grow FCA Automotive’s  presence further with SME and corporate customers.

> A number of other senior management changes have been introduced at FCA Automotive Services UK this year.

Jayne Crosse has taken the role of marketing and sales director for the retail business. Crosse joined the FCA group in 2009 and has most recently been senior marketing and services manager, FCA Automotive Services.

Wayne Vickers has taken on the new role of dealer finance director. Vickers has been with the business for more than 18 years, most recently in the role of national sales manager.

As previously mentioned, Gaillard has been appointed to boost the fleet and contract hire business.