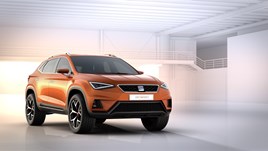 Seat has said the company is on track to launch four new models in the next two years and has laid out its growth plans for the next 10.

The company also presented a new cost savings programme called LEAP, which will be rolled out over the next two years in order to save £71.3 million.

Seat said the cost savings would not affect its plans to launch new models. The main measures of the efficiency programme include the improvement of the company’s cost structure and the implementation of measures to review logistics, manufacturing and administrative processes and to reduce energy consumption. In addition, the plan includes revising costs on outsourced services, sponsorships, travel and events.

The company said its future growth will be built on three pillars, with a focus on developing new models in growing segments with a high profit margin, prioritising customer satisfaction and improving its status as an employer in Spain to attract talent to its production facilities.

Seat will launch its first compact SUV in the first half of 2016. The company is expected to add a sub-compact SUV in 2017. Seat's UK business has admitted being over reliant on the company's B-segment Ibiza in the past. Seat UK’s average sales per franchised outlet has risen from 294 in 2010 to 432 in 2014, when annual registrations passed the 50,000 mark for the first time.

Garcia Sanz also wanted to reaffirm Volkswagen Group’s commitment to Seat as it faces high costs due to the emissions scandal.

He said: “Now is the time to act with a view to the medium and long term, regardless of recent weeks’ news.

“The Volkswagen Group has full confidence in our plan for the future and it is perfectly integrated in their strategy. The models we have announced for the next two years will reach the market as scheduled and will contribute to Seat’s sustainable growth. And they are just the first step of this strategy.”

De Meo replaced Jürgen Stackmann at the helm of Seat on October 30.