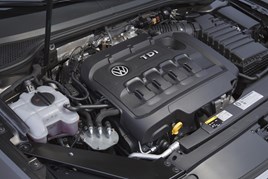 Nine Volkswagen models will require "adjustments" after the manufacturer said today it had largely concluded its investigation into incorrect CO2 emissions figures stated for its vehicles.

The company said almost all of the model variants previously listed correspond to the CO2 figures originally determined, and require no changes - with the exception of nine.

The variants affected, all from the 2016 model year, comprise of both petrol and diesel variants, with both manual and DSG gearboxes.

The manufacturer said the build volume of models affected was low, amounting to around 36,000 vehicles a year, and the deviation amounted to a few grams of CO2 on average, corresponding to increased cycle consumption of approximately one to three miles per gallon.

The models will be formally remeasured under supervision before Christmas, with results released in due course.

The vehicles affected are:

Details have not yet been released stating which, if any Skoda or Seat models are affected, although Volkswagen Group confirmed the investigation process was the same. Audi has said none of its cars are affected.