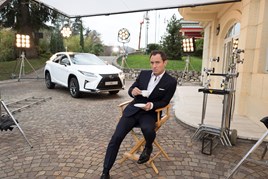 Lexus is all set to inject some Hollywood glamour into its promotional activities as it enters into a creative collaboration with Hollywood actor and producer Jude Law to launch its 2016 RX SUV.

The Life RX, a campaign aiming to amplify the qualities of the spectacular new luxury SUV, will bring to life a fast-paced and exciting lifestyle in which the driver can decide just what is possible, according to the brand.

Law will star in a television commercial filmed on the glamorous French Riviera and in the hills of Italy’s Fiuggi region as well as taking a leading role in an interactive video project.

The ad, which airs from today throughout Europe, depicts a hotel valet who is given the keys to Jude Law’s sharply styled RX and takes the car on an extraordinary and fast-paced journey.

A Lexus spokesman said: “Filmed from a first-person perspective, it catapults the audience into an exciting and luxurious new world. When the wayward valet returns, Law emerges to retrieve the keys and get into his Lexus. He immediately senses something is not quite right and, with a knowing look, drives off into the distance.”

Law said: “I love driving and the escapism that comes with it. The concept of The Life RX is such an interesting one, as it’s true that the right car can give you the keys to an extraordinary experience.

“The team at Lexus envisioned bringing something to life that was immersive and included everyone on the journey, and this was something I was keen to explore.”

The all-new, fourth generation Lexus RX made its European debut at the Frankfurt motor show in September and is on sale now.