The market benefited from the last two months of double-digit growth with December setting the highest positive monthly change of the last three years at 1.16 million units.

Therefore, the last quarter volume increase was the highest of the year, standing at 10.2% more than in Q4 2014, representing 3.42m cars sold in total.

The biggest increases came from Italy and Spain, which together added almost 400,000 units to the year’s total.

Spain posted its highest total since 2008, and Italy recorded their best result since 2011.

Germany topped the overall market with 3.2m new cars, up by 5.6%, and reaching their highest total since 2009.

Another good annual performance came from Ireland, where registrations were up by 29.7% despite a fall in December.

Portugal and the Czech Republic were also up above the 20% mark, and they were followed by 10 other markets who posted double-digit growth.

These included the Netherlands and Poland who were up 14.8% and 16.1% respectively, following an outstanding performance during December compared to the previous year.

Felipe Munoz, marketing analyst at JATO Dynamics: “Last year was very positive for the industry in terms of growth.

“Most of the car markets that suffered the most during the European crisis posted the highest annual increases.

“Even in the case of Greece, its registrations growth rate in 2015 outperformed those seen in the UK and Germany.” 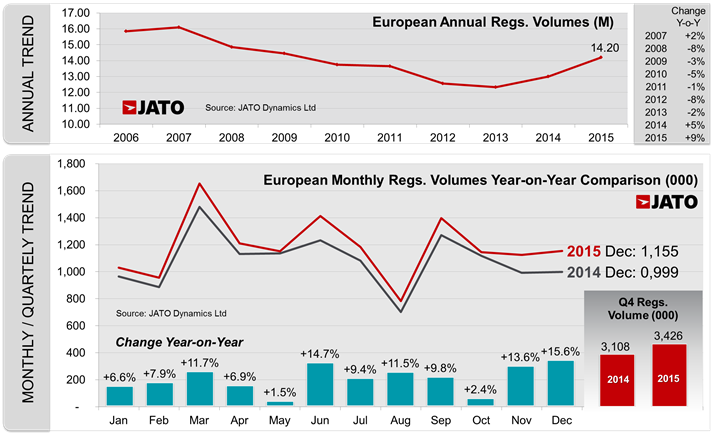 However, despite recent challenges in reality it only lost 0.28% market share.

Renault outsold Opel/Vauxhall to take third place in the rankings during 2015 thanks to its double-digit growth.

The GM brands and Peugeot complete the top five.

The rest of the top 10 was made up of the three German premium brands, with Audi leading the annual total but posting the lowest growth among them.

Fiat and Skoda completed the top 10 - the Italian brand moving further ahead of Skoda.

Outside the top 10 Nissan’s strong performance allowed it to reduce its gap on Toyota, still the largest Japanese make in Europe.

One of the biggest winners last year was Jeep, thanks to the subcompact SUV Renegade, which increased its market share from 0.31% in 2014 to 0.62% last year.

Overall, it was the 25th best-selling brand in Europe with almost 88,000 units. The new Fortwo and Forfour models allowed Smart to increase its registrations by 72% compared with 2014, gaining 0.25% of market share.

“With tiny exceptions, most of the brands competing in Europe sold more cars than the previous year. However, not all of them benefited the same from the rising demand.

“The brands that enlarged their ranges introducing new models and SUVs were the big winners in 2015.” 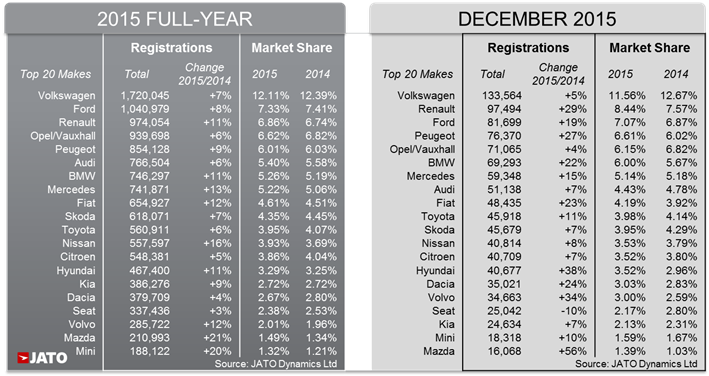 Once again the Volkswagen Golf was Europe’s best-selling car with more than 530,000 units registered in 2015.

It was ahead of the second place Ford Fiesta by more than 200,000 units.

The Golf was the best-selling car in Austria, Croatia, Germany, Luxembourg, Norway and Switzerland and kept its position despite its slower annual growth, the third lowest in the top 10.

The Nissan Qashqai was once again the best-selling SUV/crossover in Europe and was one of only two models to post double-digit growth in the top 10.

The other was Volkswagen’s Passat, the big winner in terms of volume growth with 87,500 units more than the previous year.

When looking at the top 20 best performing models, six belonged to the VW Group while Renault-Nissan and GM models occupied three positions each, Ford, FCA and PSA each had two of their models in the top 20, and Daimler and Toyota had one model each.

“The all-new cars and SUVs clearly grabbed the attention of customers last year. Europe continues to move from the traditional segments to the Sport Utility Vehicles and crossovers” said Munoz.