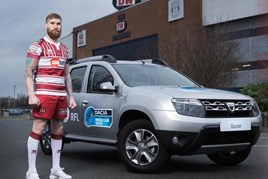 Dacia has struck up a three-year sponsorship agreement with the Rugby Football League which will see the brand gain exposure as lead sponsor at a string of sporting showdowns.

The manufacturer travelled to the homes of St Helens, Wigan Warriors and Leeds Rhinos - the three clubs that will welcome their Australian counterparts for the Dacia World Club Series later this month – to mark the start of the new relationship which will also see it become Official Car Partner of the First Utility Super League, Ladbrokes Challenge Cup and Principle Partner of the Magic Weekend.

In addition to their support for the professional game, Dacia will also be working with the RFL to support local communities to benefit the game at the grassroots level.

Sam Tomkins of Wigan Warriors said: “Having Dacia on board for the World Club Series is great boost for the game. It’s definitely one of the highlights of the season, so I’m looking forward to seeing what Dacia adds to the experience.”

Ed Preston, Communications Manager, Dacia UK said: “Our new partnership with the Rugby Football League is very exciting for all of us at Dacia. With its no-nonsense approach and community spirit, Rugby League was the natural fit for our brand and we’re looking forward to working with the RFL to bring something new and fun to the game for fans.

"We're looking forward to the season kicking off in a few days and also the Dacia World Club Series which will be our first big activation of the deal. We're working with the RFL and our dealerships to help bring these to life and ensure that the local communities benefit from the partnership."