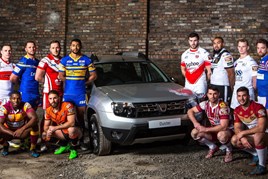 Dacia is hoping to score sales success by highlighting the brand’s robust attributes as principle sponsor for this weekend’s Super League Magic Weekend.

The Super League’s annual event sees an entire round of First Utility Super League matches played over a weekend and which this year takes place at Newcastle’s St James’ Park on May 21st and 22nd.

Dacia will use the event to launch its brand new Rugby League special edition Dacia Duster and Club packs, which celebrate the brand’s new three-year partnership with the Rugby Football League.

It is also offering visitors to its dealerships the chance to win a family ticket to the Magic Weekend event.

Ed Preston, communications manager, Dacia UK, said: “Magic Weekend is a highlight of the Super League season and we are looking forward to joining in with the excitement and giving some lucky people a totally unique prize.

“With fans of all the teams in attendance, Magic Weekend is the perfect venue to launch our new Dacia Duster Rugby League accessory pack, which allows followers of the sport to show their support for their club by personalising their car.”

Dealership staff will invite customers to guess the number of rugby balls in the boot of a Dacia Duster at Lookers Dacia, Newcastle and Evans Halshaw Dacia, Sunderland, to be in with a chance to win tickets and the chance to hand over the event’s man of the match awards and have their picture taken on the pitch.

Visitors to the dealerships will also have the opportunity to see the First Utility Super League trophy and – at Lookers Dacia – there will even be the chance to meet rugby stars Sean O’Loughlin, Wigan and England Captain, and Chris Hill, Warrington Captain.

Dacia will also offer rugby fans attending St James’ Park the chance to peruse its full range of award-winning vehicles in the event’s Fan Zone and see an array of the specially-liveried Dacia Dusters that have been finished in the ‘strip’ of each of the 12 teams that play in the First Utility Super League.