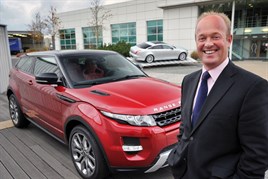 Jaguar Land Rover have “delivered everything it said it would deliver” to its retail network after achieving an 84% rise in fleet sales during Q1, says managing director Jeremy Hicks.

Jaguar fleet sales grew by 194% and Land Rover’s by 53%compared to the same period in 2015 as the brands benefitted from new models like the XE saloon and F-Pace SUV and the popularity of its sub-100g/km two-litre Ingenium turbodiesel engine.

JLR boss Hicks told AM that the growth is the result of a retail plan which was “set in stone” more than three years ago which places greater emphasis on 50 UK-wide fleet specialists to grow sales.

Hicks revealed: “We sat down three years ago and developed our growth plan. It was set in stone. That drove the requirement for 50 fleet specialists.

“It’s not about saying ‘I can sell them’, it’s about an ability to store, repair and deliver them.

“People had to believe in us as a management team, but I can stand in front of the retailers now and say that everything we said we’d deliver we have delivered.”

Reporting on its impressive first quarter sales figures, JLR said that one-in-three fleet cars sold in all the segments that Land Rover competes in was a Land Rover vehicle.

The Range Rover Evoque took a greater share of the UK fleet sector in Q1 2016 than premium rivals, it said, adding that one-in-six sales of the new Jaguar F-Pace SUV – the best-selling Jaguar ever – will go to the fleet sector.

Hicks told AM that other manufacturers had been “envious” of the proportion of JLR sales that had gone to private customers in the past, but conceded that its fleet and business activities must be strengthened in order to archive growth.

Jon Wackett, Jaguar Land Rover General Manager for Fleet and Business, said: “Our Q1 2016 sales are a great example of the fleet-suitability that many of our new vehicles have.

“We’ve really disrupted a market that has been traditionally dominated by three or four brands by introducing extremely desirable cars that represent real-world value for money.

“We are strategically aiming to balance volume of sales against maintaining strong residual values which is a core buying decision for our existing and future customers.”