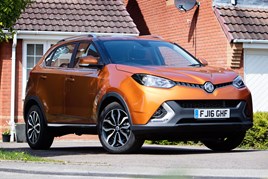 MG will stop making cars at its Longbridge plant as production moves to China – resulting in 25 redundancies.

The firm begun production of its first new model under the ownership of Sanghai Automotive Industry Corporation in 2011, but an MG spokesman said that vehicle assembly at Longbridge was no longer "required" and cars would now arrive in the UK "fully built ready for distribution" from China.

More than 400 design engineers and other staff at the SAIC Motor Technical Centre (SMTC) at the site and MG Motor employees are not affected.

A spokesman for MG said: "Centralising production demonstrates MG's commitment to the future, as well as its continued focus on attracting and developing the highly-skilled automotive engineering and design talent present in the UK.”

The spokesman added that production staff would be moved into new roles where possible.

MG Motor UK’s announcement regarding the end of vehicle production at Longbridge came in the same week that the manufacturer announced the completion of an expansion of the site’s Motor Technical Centre (SMTC) to support electrical component testing facilities in the UK.

A total of 22 team members will work at the facility which features new lighting, cabling and display screens to further improve operational efficiencies.

Richard McAlister, Vice Director of Electrical Engineering at the SMTC, commented: “The latest in a long line of investment projects at our UK Technical Centre in Longbridge, expanding the electrical component testing facility provides significant opportunity to test, validate and facilitate an even greater workload.

“Thanks to facilities like our electrical component testing facility, we can now identify and solve issue long before a new car enters the pre-production stage. This saves time and vast amounts of money by streamlining the whole process.”