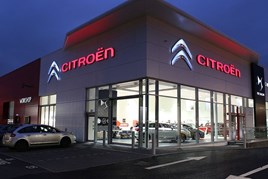 Citroen has informed the franchisees in its 182-strong dealer network that half of the sites will not continue to represent the DS Automobiles premium-sub brand from 2018.

The news was officially confirmed individually to franchisees this summer, after AM revealed last November that only around half of Citroen/DS dealerships would continue with the split-off DS business.

The official notice coincided with a period when the average profitability of the network has slumped from 1.2% to 0.5% after a lack of focus on retail sales.

“Clearly the NFDA results were disappointing. We’re not oblivious to the fact our dealers are saying they’re unhappy,there’s a problem, and the only thing we can do with that is react and work with them to resolve their problems,” he said.

The dealers who’ll lose DS were selected due to the lack of sales opportunity for the premium brand, with criteria based on local demographics and past DS sales performances.

He said Citroen franchisees have since seen the product pipeline, with increased volume expected from new C3, and other unspecified models further ahead (a C-segment crossover SUV is an obvious fit), and are more upbeat now.

“We have these short term challenges, yes, but ultimately we’ll fix those challenges with our dealers, we’ll do it together.”

“We can’t be oblivious to the impact of going through this transition, and it’s really important to our dealer partners that we work with them, because they’re the backbone of what we do.”

After the NFDA survey Citroen spoke with its dealer council and dealer forums.

Hassan recognised the split has caused “hesitancy and concern over the future”, and he and Citroen global chief executive Linda Jackson have tried to reassure the UK network.