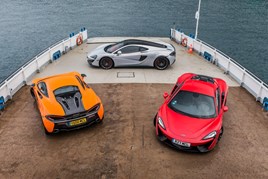 The appeal of the PCP is central to a range of new finance products which have now been made available for the McLaren Sports Series through McLaren Financial Services.

Customers can now access the 570GT and the most attainable McLaren yet, the 540C Coupé, through the recently-launched products offered by the British supercar manufacturer.

The PCP offer now makes it possible for McLaren 540C Coupé for £946.93-per-month after a £35,000 deposit, equating to £31.13-per-day, which is “cheaper than a return journey on the Gatwick Express from London Victoria” according to McLaren.

JBR Capital are behind the finance plan which is also available for cars in the more exclusive McLaren Super Series cars.

Jolyon Nash, McLaren Automotive’s executive director – Global Sales and Marketing, said: “The market reception to the McLaren Sports Series has been exceptional and we see an ever increasing number of customers purchasing their cars via McLaren Financial Services.

“The Sports Series introduced McLaren to a completely new audience and customer profile. We are proud to have delivered a world-beating product and our very competitive finance offering promises to further improve our luxury ownership and customer experience.”

Earlier this year Nash told AM that McLaren Automotive plans to double the number of cars it produces between 2015 – when it sold 1,654 cars through its global dealership network of 80 retailers across 30 markets – and 2017.

Sports Series cars, like the £126,000 540C, were central to this plan, making the brand more accessible to a wider market.